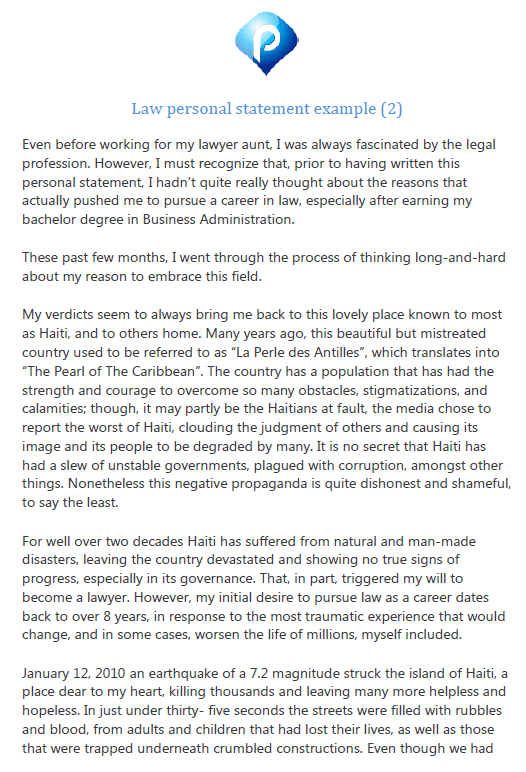 Even before working for my lawyer aunt, I was always fascinated by the legal profession. However, I must recognize that, prior to having written this personal statement, I hadn’t quite really thought about the reasons that actually pushed me to pursue a career in law, especially after earning my bachelor degree in Business Administration.

These past few months, I went through the process of thinking long-and-hard about my reason to embrace this field.

My verdicts seem to always bring me back to this lovely place known to most as Haiti, and to others home. Many years ago, this beautiful but mistreated country used to be referred to as “La Perle des Antilles”, which translates into “The Pearl of The Caribbean”. The country has a population that has had the strength and courage to overcome so many obstacles, stigmatizations, and calamities; though, it may partly be the Haitians at fault, the media chose to report the worst of Haiti, clouding the judgment of others and causing its image and its people to be degraded by many. It is no secret that Haiti has had a slew of unstable governments, plagued with corruption, amongst other things. Nonetheless this negative propaganda is quite dishonest and shameful, to say the least.

For well over two decades Haiti has suffered from natural and man-made disasters, leaving the country devastated and showing no true signs of progress, especially in its governance. That, in part, triggered my will to become a lawyer. However, my initial desire to pursue law as a career dates back to over 8 years, in response to the most traumatic experience that would change, and in some cases, worsen the life of millions, myself included.

January 12, 2010 an earthquake of a 7.2 magnitude struck the island of Haiti, a place dear to my heart, killing thousands and leaving many more helpless and hopeless. In just under thirty- five seconds the streets were filled with rubbles and blood, from adults and children that had lost their lives, as well as those that were trapped underneath crumbled constructions. Even though we had experienced the same tragedy, I couldn’t begin to fathom the pain and agony the people were going through.

While the majority of the population was fighting for their lives, trying to survive such a horrific moment and debating on what their next move would be, I was fortunate enough to leave the country and continue my studies elsewhere. At the time I was only fourteen years old, and having to fit in a new world, leaving my family behind and hoping that one day I would be able to go back home. Within the six months I spent in the United States, after the earthquake, I started to make sense of the situation back in Haiti, and came to realize that our way of life there was anything but normal. Hearing gunshot almost every night, news of friends and family being kidnapped or murdered had taken a toll on everyone there, and having the earthquake added to it, we were left but to wonder what we had done to deserve such a cruel fate. With little to no government support as well as an extremely poor infrastructure, the people of Haiti were left to fend for themselves. To see a country with so much potential, unable to provide the necessary means allowing its people to show what they are made of, simply made my heart ache.

Growing up in Haiti is no easy task for a child and even harder for a parent; however, despite its flaws, some useful life lessons were channeled through the country’s instability. Although I was fortunate enough to attend school and had a home to go to, coming from a third world country such as Haiti, I grew up to be extremely aware of the hardship that over eighty percent of the world’s population faces, and completely grateful for the smallest things that some have taken for granted. Consequently, I grew tired of talking but not acting. As a legal assistant I have had the opportunity to experience first hand ways in which one could work towards the improvement of ones country, without necessarily being physically present to do so. I have worked on immigration files amongst other things, allowing dreamers to gain access to every opportunity this country has to offer, opening doors that would someday help them return home and work towards its improvement. To be a part of such a major part in someone’s life and to see how happy they are to finally be able to show their true potential reinforced the idea that a lawyer is in fact what I want to be. To finally be able to give back, allowing others to have similar advantages I have received has been personally fulfilling.

I am certain that being able to study law at the Nova Southeastern University would be equally fulfilling. To have the opportunity to study at a one-of-a kind institution and to be in an environment where the thirst-for knowledge is just as strong than the will to pursue one’s own goal, would allow me to discover my true capabilities while developing my intellectual identity. I am prepared to live a greater experience; therefore, I will, without a doubt, take full advantage of every opportunity offered. Based on my academic achievement, cultural background and the knowledge I have acquired as a legal assistant, I am confident that I will be a great asset to the Nova Southeastern University community, as well as the legal profession.

This website uses cookies to improve your experience while you navigate through the website. Out of these cookies, the cookies that are categorized as necessary are stored on your browser as they are essential for the working of basic functionalities of the website. We also use third-party cookies that help us analyze and understand how you use this website. These cookies will be stored in your browser only with your consent. You also have the option to opt-out of these cookies. But opting out of some of these cookies may have an effect on your browsing experience.
Necessary Always Enabled
Necessary cookies are absolutely essential for the website to function properly. This category only includes cookies that ensures basic functionalities and security features of the website. These cookies do not store any personal information.
Non-necessary
Any cookies that may not be particularly necessary for the website to function and is used specifically to collect user personal data via analytics, ads, other embedded contents are termed as non-necessary cookies. It is mandatory to procure user consent prior to running these cookies on your website.
SAVE & ACCEPT